You are here: Home / About / Meet The Marlins / Dave Moffat 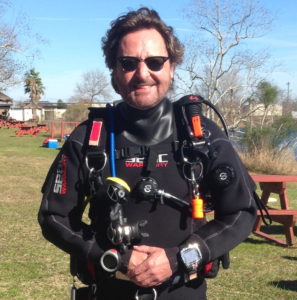 Dave hails from Scotland where he spent most of his career involved in developing electronics and software systems for the defense, finance and E&P industries.

Dave loves traveling and had the opportunity to see the world while installing and troubleshooting software systems on oil exploration vessels. He has spent time in East and West Africa, South East Asia, the Americas and Middle East plus numerous trips to the North Sea.

Dave transferred to the US almost 10 years ago when the company he was working for was acquired by a Houston based company.  Since Houston has such easy access to the Caribbean, Dave rekindled his love for scuba diving in some of the best known diving locales in the world: Belize, Roatan and the cenotes of the Yucatan Peninsula are some of his favorites.

Dave enjoys seeing the joy on new divers faces when they complete their Open Water dives and become PADI certified divers. He is thrilled to have the opportunity to introduce new divers to this incredible underwater world we have.