You are here: Home / About / Meet The Marlins / Tonya Merritt 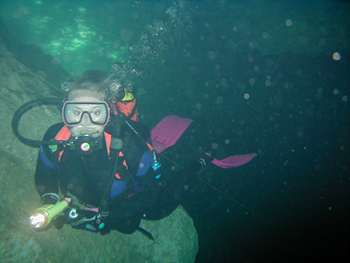 Tonya has been diving since 1986, logging over 4000 dives around the world and became a PADI Scuba Instructor with a rating of Master Instructor. She loves the thrill of seeing new divers in the ocean for the very first time. She has obtained many specialties, with Photography being the most intriguing to her. However, the best part of scuba diving is traveling! The Caribbean is her absolute favorite place to dive, given any free weekend. Her favorite dive destinations include Cozumel, Palau, Truk Lagoon, Indonesia, Yap and the Coral Sea in Australia. In September 2004, she also had the opportunity to dive with President of Mares Diving Corporation in Portofino, Italy.

She graduated from Texas State University with a Bachelor of Business Administration (BBA) in Finance. At SWTSU, she was the Captain of the Strutters Dance Team, performing abroad in Soeul, Korea and Hong Kong, member of the Chi Omega Sorority, voted by her peers as a Gallardian All-Campus Favorite and President of the Golden Key National Honor Society, launching a university wide program for high school students for the “Just Say No To Drugs” Campaign. She was selected in the top five females of the 1989 graduating class for the Sally Beretta Most Outstanding Female University Student. Upon graduation, at that time, she was the youngest member of the SWTSU Alumni Board to be selected. She tutored Math (Algebra, Geometry, Trig, ACT, SAT, TAAS Tests) for six years for high school and college students and judged for High School Drill Team and Officer Try-outs, Competitions for 8 years and judged for Jr. Miss Pageants for 5 years.
She is the President and Travel Coordinator for Gigglin’ Marlin Divers. She has been an underwater model for postcards in the Virgin Islands and had 2 pictures published in Sport Diver Magazine in the September 2004 issue, while diving in Australia on the Yongola wreck. In 2005 at the National Vendors Show, DEMA, her life-size photo was on display in Las Vegas, advertising for Sport Diver Magazine. She has recent articles in Texas Highways Travel Magaine, May 2008 issue and in The Undersea Journal in the First Quarter 2009 issue. She is a retired flight attendant for Delta Airlines after traveling the world for 21 years.
She has been married to Bill for 28 years. They love traveling, diving and very thankful for the opportunity to share this with their children, Danielle, 23, and Chase, 20 and make a positive influence serving the Houston & surrounding areas in the Swimming & Diving world. She was very involved while her children attended Dawson High School in Pearland with Swim Team, Drill Team, Football, Cross Country, Scouting and at New Hope Church where she sang with the Praise Team.  She is now a big supporter of Texas A&M University in College Station and loves the football tailgating season.  Her daughter graduated in 2017 and son will graduate in 2020.  Whoop!  Danielle is currently living her dream in St. Kitts, West Indies diving in the Caribbean while achieving her DVM at Ross University School of Veterinary Medicine.